The Abrams Falls Trail Offers Many Things to Visitors

Cades Cove is one of the more picturesque locations in The Great Smoky Mountains National Park. There’s many different forms of wildlife to enjoy including deer, black bear, wild turkey, fox, and raccoons just to name a few. Even though you can’t see this natural wonder from the Cades Cove loop, that doesn’t mean you should skip the Abrams Falls trail. Too often visitors skip some really great places to see and experience simply because they’re in a hurry to get to their next planned activity. I would encourage everyone to not leave the Cades Cove area without visiting the historical buildings, but also be sure to enjoy this natural feature which will require a little more effort than just driving the 11 mile loop. Read on for a little history lesson and what you can expect to encounter on this popular trail. 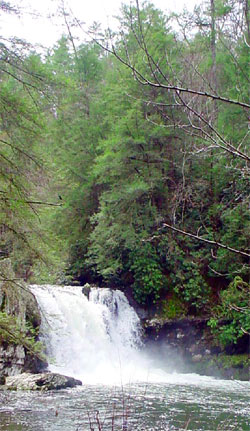 The trailhead to Abrams Falls can be reached 4.8 miles into the Cades Cove loop just past marker #10. Once you pass Abrams Creek, turn right onto a gravel road. You will drive on a grassy area for about a half a mile before reaching a large parking area where you’ll find a footbridge. This is the beginning of the trail. People like to use this footbridge for dipping their toes in the stream to cool off. You’ll then see a little side trail, which leads to the Elijah Oliver house. Elijah was the son of John Oliver, the first white settler in Cades Cove; the John Oliver house is the first historical site on the loop road as well.

The trail itself is a little over 5 miles roundtrip. It's considered moderate due to its length and elevation gain. It goes for several hundred feet throughout the entire hike however, it ends up descending on the way to the falls, making it a bit easier. It's also important to note if you arrive in the morning, you might not be able to drive the loop. Cades Cove is closed to vehicles before 10 a.m. on Wednesdays and Saturdays from May to September to accommodate morning bikers or walkers.

Plan on spending at least three hours of your day hiking Abrams Falls Trail. The trail is a little rocky and packed with dirt so you may not want to take smaller children on this hike. Also, given the terrain, wear comfortable shoes.

There are about eighteen smaller streams that drain into Abrams Creek which will parallel your walk for most of the way. At about 1.1, miles into the hike, you’ll find Arbutus Ridge and then the descent will begin. Soon thereafter you’ll reach a foot log over Stony Branch, and then it’s another short climb at mile 2.2. Just before you reach the falls, you’ll cross Wilson Branch and then take a side trail.

At Abrams Falls you’ll notice an abrupt end to the peaceful creek you could see and hear throughout the hike. It’s now a thunderous gushing 20-foot-high waterfall. This is where you can really stop and enjoy the fresh clean mountain air. If you’re an early riser and can get to Abrams Falls early, you may even see a rainbow as the sun rises over the ridge and hits the falls.

The top of the falls is 35 feet wide, the pool at the bottom is about the same; however, it’s quite a bit longer at 100 feet. The force caused by the fall’s sprays water more than 50 feet into the rhododendron and hemlock on the opposite side of the trail. The sheer force of the water is evident with the appearance of smooth pebbles and logs that have been pounded for decades. The cliff itself is made of sandstone, and more of it is located on top of the falls and can be commonly found throughout the area.

The name of the creek and the trail, Abrams, were named for Cherokee Chief Abram whose name was previously Oskuah. His village was located downstream from the waterfall--located at the mouth of Abrams Creek on the Little Tennessee River. This location now sits below the waters of Chilhowee Lake--created from the man-made Chilhowee Dam which was completed in 1957. It forms part of the boundary between The Great Smoky Mountains National Park and the Cherokee National Forest. The Chilhowee village was a prehistoric and Native American site located in Blount County. Sadly, it was destroyed by late-eighteenth century frontiersmen. However, the name Chilhowee still resonates as a symbol for area developments and natural wonders. This includes the Chilhowee Dam and its reservoir, geologic formations, churches, schools, parks, and even a neighborhood in nearby Knoxville.

Abrams Creek is also home to the only native salmonid in the park, brook trout. John Oliver was an early settler in Cades Cove. The story is that he stocked the cree

Rainbow trout weren’t the only living things introduced into the park; in 1988, park biologists began to release some 133 river otters successfully into the Park. The Cherokee tribe actually named Cades Cove “Tsiyahi”. This is their word for “place of the otter”--so it was clear that otters were once widespread in the creek. If you’re lucky, you’ll be able to spot a frolicking otter--or otters--on your hike.

More recently in 2011, a very large and rare EF-4 tornado swept through the western end of Cades Cove downing nearly 5,000 trees and closing the trail for more than a month. Crews worked meticulously to clear the debris that blocked the path. The destruction left a total of 33 miles of trails impacted with damage, but the area has since recovered nicely.

Not far into your hike you’ll begin to see the arbutus flowers along the trail. The name of Arbutus Ridge on the trail comes from these early blooming spring flowers. Arbutus flowers are actually named Mayflowers and are very popular, having an important place in American history. They’re the state flower of Massachusetts. They were once considered the queen of spring woodland flowers to the Pilgrims. This was because of its lovely ground-running vine with delicate shell-pink pastel color.

Once you descend from Arbutus Ridge, you’ll want to watch for some unusual wildflowers, especially in the spring. The rocky cliffs should feature clusters of bleeding heart, whose species are native to Japan. Much like trilliums and daffodils, the larger bleeding heart will bloom in the spring. Depending on the area, they may disappear completely by midsummer. William Britten, an excellent photographer in the Smoky Mountains, has taken many pictures of these flowers. This is despite their difficulty in spotting here. Besides the Abrams Falls Trail, Mr. Britten has found these flowers along Laurel Creek Road located just west of the entrance to Tremont. There are different forms of the bleeding heart, but the Asian garden variety is different in that it has larger blooms and not quite as rare as the ones that appear in limited areas of the Smoky Mountains.

Another flower that blooms in the spring that is no stranger to the Smoky Mountains is the mountain laurel flower. This can be found all through the trail and next to the creek. Mountain laurel is considered one of the most beautiful of native American shrubs. It's an extremely colorful asset to any landscape. Their appearance is much better when grown in sunlight, but they are also very lovely in a partial shade. It’s no wonder that the Great Smoky Mountains provide the perfect location for such a flower.

The last good springtime flower on the trail is the sweet shrub. This is a small bush with reddish-maroon flowers, but what sets it apart from the others is its fragrance. When it begins to bloom in the month of May, it typically gives off what can be described as a strawberry-banana-pineapple scent. The leaves are normally dark green and grows in an oval shape. Once again, this flower prefers at least 4 hours of direct sunlight mixed in with a partial shade. This works well with its location in the Smokies. An interesting fact emphasizes its fruity aroma. The ladies who once inhabited Cades Cove thought so highly of its scent that they were known to use the petals for perfume.

It’s important to note that the following information is not meant to deter anyone from visiting Abrams Falls, but merely to educate the visitor as to what can, and what has previously, happened on this trail over the years.

Abrams Falls Trail became infamous for its distinction in the October 2008 issue of Backpacker magazine. It was one of the ten most dangerous hikes in the United States. Some of the dangers here are numerous, but they must be mentioned due to its popularity among hikers. Drownings have been known to occur because of the strong currents beneath the waterfall. Swimmers and sunbathers like to gather in the pool area; however, you should not venture too far out due to these currents.

There are also plenty of rocks scattered all around the bottom and at the top of the waterfall. Most of which are very slippery and can cause accidents resulting from not wearing good hiking boots. So, if you aren’t wearing the right footwear, it’s advised that you should keep your distance; you can still get an excellent photo of Abrams Falls from a safer distance.

When hiking anywhere in the Great Smoky Mountains National Park, it's advised to have a backpack to carry all the essentials you may need during your hike which include water, snacks, safety items. It should also be noted that while the water in the pool from Abrams Falls looks clear and inviting, never even think about drinking it. You don’t want your vacation cut short by a simple little sip of what appeared to be safe and cool mountain drinking water; it does contain bacteria.

Many of you who plan on taking a day trip to Cades Cove and want to just see Abrams Falls may not be aware that there is more to the Abrams Falls Trail. There is an additional two miles to the trail that are not surprisingly more isolated. This is usually tackled by the more experienced hiker. It ends at Abrams Creek Ford, and the hiker will then have two options at his or her disposal. There is Hannah or Hatcher Mountain Trail. The latter leads right to the Cooper Road Trail and the Beard Cane Creek Trail; the former leads left to the Rabbit Creek Trail at Scott Gap. Most visitors, though, will have more than enough other things to accomplish on their day trip to Cades Cove. This includes checking out all the cool and educational sites on their visit.

It’s recommended to get an early start, especially if you want to see Abrams Falls. Cades Cove can get awful crowded with vehicle traffic and bear jams can only worsen matters. Despite the early start, it can still take some time getting through the loop. So, don’t be in a rush and be mindful to respect your fellow nature lovers. After all, this should be designated as an all-day sightseeing adventure you’ll want to be pleasant and memorable and not stressful and like your busy everyday daily life.